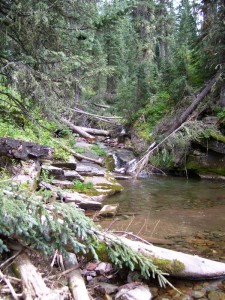 The Dolores River is best known for its tailwater fishery below McPhee Reservoir, but in its upper reaches the river has an ample supply of mountain fishing to offer. Two branches, the main Dolores and the West Dolores, drain the high country below Mount Wilson and Lizard Head Pass in the western San Juan Mountains. It is an area rich in minerals and with a long history of mining that has created a mix of public and private land not found on many other southern Colorado rivers. Although the fishing is not as well known as on nearby streams, the upper Dolores does offer uncrowded streams amid some of the best scenery in the San Juans outside the Weminuche Wilderness.

The Dolores River heads below Lizard Head Pass and flows to the southwest through the mining town of Rico to enter McPhee Reservoir at the town of Dolores. On both forks the mix of public and private land makes angling a bit tricky. Most private land is clearly posted. Consult the San Juan National Forest map to get an overview of the land ownership boundaries along the rivers.

On the main Dolores public access is found just above McPhee Reservoir and through the town of Dolores. From Dolores to Rico the river is entirely on private land except for short stretches at Stoner and a mile downstream from the Priest Gulch Trailhead, which is about 11 miles south of Rico. From 2 miles north of Rico to the headwaters, the Dolores lies within San Juan National Forest.Close to Lizard Head Pass, the Dolores turns east away from the highway and is reached by the rough Forest Road 204 and the East Fork Trail.

On the West Dolores, locally known as “the West Fork,” land-ownership comes in blocks. Most public access surrounds the national forest campgrounds of Emerson, Mavreeso, and West Dolores. Watch carefully for posted land in this area. Above Dunton, the river stays on Forest Service land.

The forks are wide enough to permit easy casting from within the streams. Hip boots will be sufficient for early- and late-season angling, and wet wading is pleasant throughout the summer. The rocky bottom can be slick, so bring appropriate footwear. 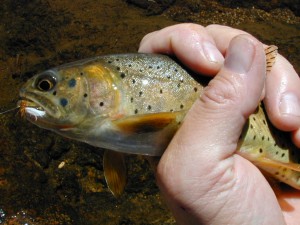 Anglers will find brown, brook, and rainbow trout in both forks of the Dolores. Fish are small, averaging 6 to 10 inches in the upper rivers near Lizard Head Pass and in the wilderness.Lower down in the canyons trout are larger, ranging from 10 to 14 inches, with a few rare larger fish.

As with most freestone mountain waters, trout in the upper Dolores are opportunistic feeders. Use a fly that is easy to see in choppy water, and one that you have confidence in. Because the fish in these streams don’t see a lot of anglers, you can keep it simple. Royal Wulffs, Renegades, and the House and Lot Variant in sizes 12 to 16 will see you through most situations on the forks.

The Above Information on the Dolores River is excerpted from the book “Fly Fishing Southern Colorado” by Craig Martin, Tom Knopick and John Flick. It is reprinted courtesy of Pruett Publishing Company. All Rights Reserved.