San Juan River Fly Fishing in Colorado is renown through the United States. Year round trout fishing on this quality water in Colorado is both challenging and rewarding for fly fishing anglers.

In 1765, Juan Rivera was commissioned by the Spanish governor of New Mexico to push northwestward from Taos to search for minerals and to make contact with the Native Americans in what is now southern Colorado. Rivera’s diary reveals he reached a new river on the eve of La Dia de San Juan. Saint John was Rivera’s patron saint, and he named the river and the mountains from which it flowed “San Juan.” 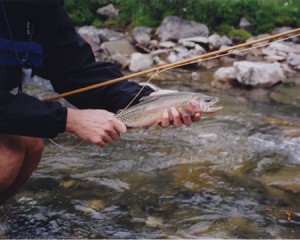 The San Juan River is a major tributary of the Colorado River and one of the largest rivers draining the mountains that share its name. It heads in the high country south of Wolf Creek Pass where spectacular peaks and glacial valleys provide a dramatic backdrop to the river.

The San Juan then flows west and south into New Mexico, where it is impounded by Navajo Dam, creating a world class tailwater fishery. Below, the San Juan becomes a desert river, carving deep canyons before joining the Colorado River at Lake Powell in Utah.

Although much of the San Juan in Colorado flows through private land, there are still plenty of fly fishing opportunities on the San Juan. A short stretch of public water is found within the town of Pagosa Springs, and it offers the real possibility of landing a 20-inch trout within the town limits.

The lower miles of both forks hold populations of brown and rainbow trout. Fish remain on the small side, ranging from 7 to 12 inches. The forks hold small cutthroat trout in their upper miles.The lower miles of the East Fork receive heavy fishing pressure, and one must work the water thoroughly to find good-sized fish.The two main forks of the upper San Juan are delightful small trout streams. The East and West Forks of the San Juan are a pair of complementary streams. The East Fork is a tumbling freestone stream, and there is easy access to 6 miles of river by graded road. For the more adventurous, the West Fork offers endless hike-in water deep in the Weminuche Wilderness in rugged canyons and peaceful meadows. In general, the East Fork is easier to fly fish, and the West Fork offers more adventure and solitude. Neither stream is a producer of large fish, but they are consistently good for small trout. 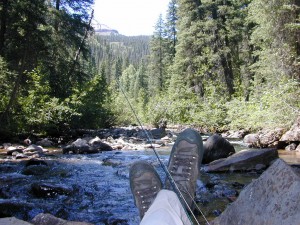 The lowermost miles of the East Fork tumble through a rocky gorge. The stream is pocket water with large boulders, deep plunge pools, and small waterfalls. It is about 20 to 25 feet wide with a cobble bottom. In most places the stream is wadable, but anglers should wear felts and use caution in the swift water. The canyon is heavily forested with large Douglas firs growing on the stream banks. It is difficult to work along the stream on the banks. Casting from the banks is difficult due to the thick vegetation, but in the river casting is easy. For this stream, 7½- to 8-foot rods are appropriate.About 2 miles up from the campground the East Fork drops through a series of falls where fishing is difficult. Calmer water begins above the junction with Sand Creek. From here to the boundary of private land the river is comprised of long riffles and runs flowing through small meadows with spotty streamside willows and alders. Angling is much easier in this stretch than in the pocket water below. The river in this stretch is about 12 feet wide.

Access to fly fishing the West Fork of the San Juan is more difficult. From its junction with the East Fork, the West Fork flows through a lovely valley on private land. As the river turns west into the mountains, Forest Road 648 leads to West Fork Campground and the beginning of public water. The road offers easy access to the river for a half-mile above the campground. Just above the Forest Road 648 bridge over the West Fork is a half-mile of public water with difficult access. The river flows through a dramatic canyon with steep cliffs and a rugged floor. The way upstream is often blocked by large rocks. A parcel of private land blocks further progress along the stream. 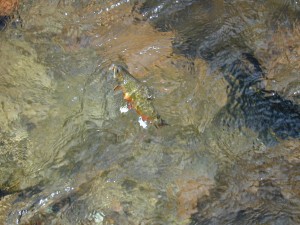 The majority of the West Fork is accessible only by trail. About 12 miles of river are above the bridge on Forest Road 648. The glacial valley of the West Fork is one of the most spectacular locations in the San Juans, with hot springs and numerous waterfalls adding to the attraction. The upper river is reached via the Rainbow Trail. The trailhead is just above the bridge on Forest Road 648. The first mile of the trail passes through private land, so observe the frequent posted warnings and stay on the trail. The trail remains high above the stream for the first 3 miles, dropping to a footbridge across the West Fork near Beaver Creek. From here upstream, short stretches of meadow and pocket water are accessible.

The gradient of the West Fork is steeper than that of the East Fork, and the towering walls above the stream shed huge boulders that break up the flow. The result is superb pocket water and long riffles.

The Above Information on the San Juan River is excerpted from the book “Fly Fishing Southern Colorado” by Craig Martin, Tom Knopick and John Flick. It is reprinted courtesy of Pruett Publishing Company. All Rights Reserved.