When McPhee Dam was completed in 1983 it initiated a chain of events that have led to new angling opportunities, disappointments, misconceptions, and controversies that continue more than two decades later. Impounding the Dolores River, the dam is the keystone of a wide-ranging irrigation project designed to deliver water to the bean fields of the high rolling hills north of Cortez. A by-product was the creation of a tailwater fishery on the Dolores that once was, and it is hoped will be again, a premier tailwater fishery in Colorado. 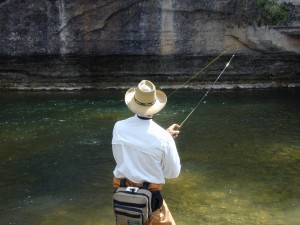 As water began flowing from McPhee Reservoir into the Dolores Canyon below the dam, the trout fishery in the river was reborn. Beginning in the 1930s, diversion projects took the water from the Dolores and sent it south to the agricultural fields around Cortez. So much water was taken from the river that it frequently ran dry in summer below the town of Dolores, and the trout fishery was destroyed.

When cold water from McPhee Reservoir was first released into the river channel in 1983, CDOW stocked 10,000 fingerlings each of brown, rainbow, and Snake River cutthroat trout, and the rebirth of the Dolores was on its way. The fishery developed with amazing speed, but under conditions that would soon prove to be misleading.First, the closing of the dam was followed by several wet years and above normal precipitation that quickly filled the reservoir.McPhee is operated like Navajo Reservoir—water for irrigation is pulled directly from the impoundment and much of the irrigation water delivery system was incomplete. Reservoir levels and river flows remained higher than could be expected under more developed irrigation.

The minimum flow for the year was established by estimating the reservoir level that would occur on the last day of June. Depending on the estimate, the minimum flow was set at either 78 cfs, 50 cfs, or 20 cfs. When a long drought hit in 1987, flow into the reservoir dropped dramatically. At the same time, the irrigation water delivery system was partially completed and water from the reservoir headed to surrounding agricultural fields. Because of the drought conditions, flows in the river remained at 78 cfs for longer periods of time than in the previous four years. 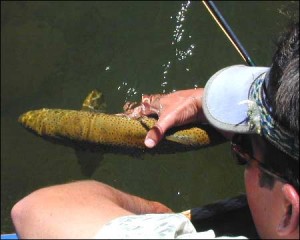 The effect of 78 cfs on the trout population was immediate. From 1987 through 1989 the fishery in the Dolores shrank to the carrying capacity of 78 cfs. The fine reputation that the river had acquired in 1986 was no longer representative of the new conditions and many anglers went away disappointed. By 1989 the river had again stabilized as a quality fishery, but it was not the same as in 1986. The river held good numbers of trout, and the fish grew to a nice size.

In 1990 the inevitable happened. On March 1 it was determined minimum flow for the year would be 20 cfs. The gates were closed down, and for over 100 days flow from the dam remained at 20 cfs, far too little water to maintain trout. From 40 to 60 percent of the trout in the river perished before public pressure brought managers and water users to reevaluate the 20 cfs determination. Flows were increased to 50 cfs.

The lesson learned from 1990 was that a flow of 20 cfs will not maintain a quality trout fishery below McPhee Dam. Acting quickly, a local group of concerned parties pushed for the organization of the Dolores Optimization Committee. Representatives of the Bureau of Reclamation, the Dolores Water Conservancy District, the Bureau of Land Management, the Forest Service, the Colorado Division of Wildlife, Colorado Trout Unlimited, and the water user boards sat on the committee. Seeking a change in the management strategy more conducive to trout, the committee arrived at the “pool” concept. In pool management, minimum flow determinations were eliminated and variable flows were introduced. In short, variable flow pushes the same amount of water through the system but changes the volume and timing of high and low flows. The purpose of variable flow was to maintain water for the irrigators and to ensure there was always adequate water flowing through the dam for the trout downstream. Since pool management was introduced, the river has done better with less water. Generally, more water goes into the river in summer than in winter. Winter flows can be expected to range between 30 and 40 cfs, while summer flows tend to be in the 70 to 90 cfs range. Spring flows can sit at a low 50 cfs to a high of up to 5,000. Flows are dependent on the depth of winter snowpack and water conditions in the reservoir. 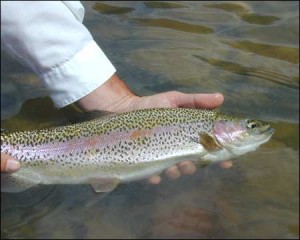 With recent flow management of the Dolores River below McPhee, the fishing varies from year to year, but it still remains a great place to cast a fly. The river has seen an increase in brown trout. Currently the Dolores holds a good population of fish in the 12- to 16-inch range, with some fish over 20 inches.

Despite the history of uses and abuses, the Dolores remains a fine stream. The first 12 miles below McPhee Dam—all the way to Bradfield Bridge—are managed as catch-and-release water, and all hooked trout must immediately be returned to the river. Angling is limited to artificial flies and lures only.

Deep within the canyon the rest of the world seems to disappear from sight and mind. The Dolores threads its way over the wide floor of the gorge. Behind the shining water are white cliffs of sandstone composed of the telltale swirling lines of ancient sand dunes from the time of the dinosaurs.

Easy access to the Dolores helps maintain its popularity, and with 12 miles of water it is easy for anglers to find their own piece of river. Below the dam, the river flows through a wide sandstone canyon bordered by rock cliffs. The walls of the canyon are covered with juniper and piñon woodlands, but the canyon itself supports a variety of vegetation ranging from cottonwood to sagebrush to Douglas fir. It is a user-friendly stream with easy wading, low gradients, and plenty of room to work into position and make a cast. There is not much pocket water on the river, but it has many shallow riffles and slow turns. During low summer flows holding water is scattered and the angler will have to cover a long section of river in the course of the day.

The temperamental nature of the river creates conditions where it is not always easy to catch fish. Trout get long looks at a fly before deciding whether or not to take it. Although matching the hatch is usually the most productive method for catching trout, there are times when the fish will take anything. Experienced anglers tend to love the challenge of the Dolores; novice anglers often have a tough time. 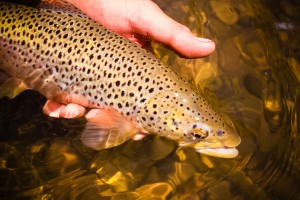 The first few weeks following runoff is a prime time to be on the Dolores. Fishing is noticeably slower in the heat of summer, but it picks up again in the fall. In general, cloudy days are best.

Dry flies are the most popular way to fish the Dolores. It is best to try to match the hatch and fish to rising trout. Most hatches are more intense near the dam and become sporadic lower down. Pale morning dun hatches occur in midsummer in the late morning. Caddisflies are also important on the Dolores, but hatches of these insects are not predictable or consistent. The blue-winged olive is the most consistent hatch on the river. Hatches are most numerous in spring and fall, but summer hatches are not uncommon, particularly on overcast days.

In season, terrestrials are particularly effective on the Dolores. Ants and beetles are frequently found on the water, making foam beetles and ant patterns a good choice at any time of the year. Carry patterns ranging from size 10 to 16. Grasshopper season runs from June to midfall. Large hopper patterns in sizes 6 to 10 are particularly good fished along the banks.

By late September the insects on the river are small. A size 24 blue-winged olive is the main hatch through November, and thin to heavy midday hatches make the trout active feeders. In the absence of a hatch, attractors are a good choice after midday. Below the surface, large populations of dace and sculpins make streamers an effective method of fishing the Dolores. In fact, these patterns are a good choice at any time.

Even with a checkered past and an uncertain future, the Dolores remains a river worthy of the serious angler’s attention.

The Above Information on the Dolores River is excerpted from the book “Fly Fishing Southern Colorado” by Craig Martin, Tom Knopick and John Flick. It is reprinted courtesy of Pruett Publishing Company. All Rights Reserved.