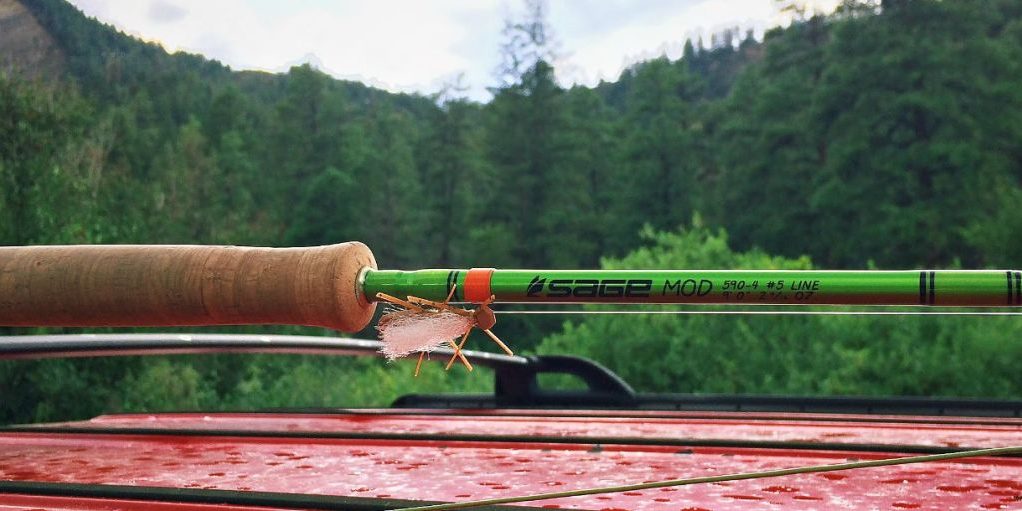 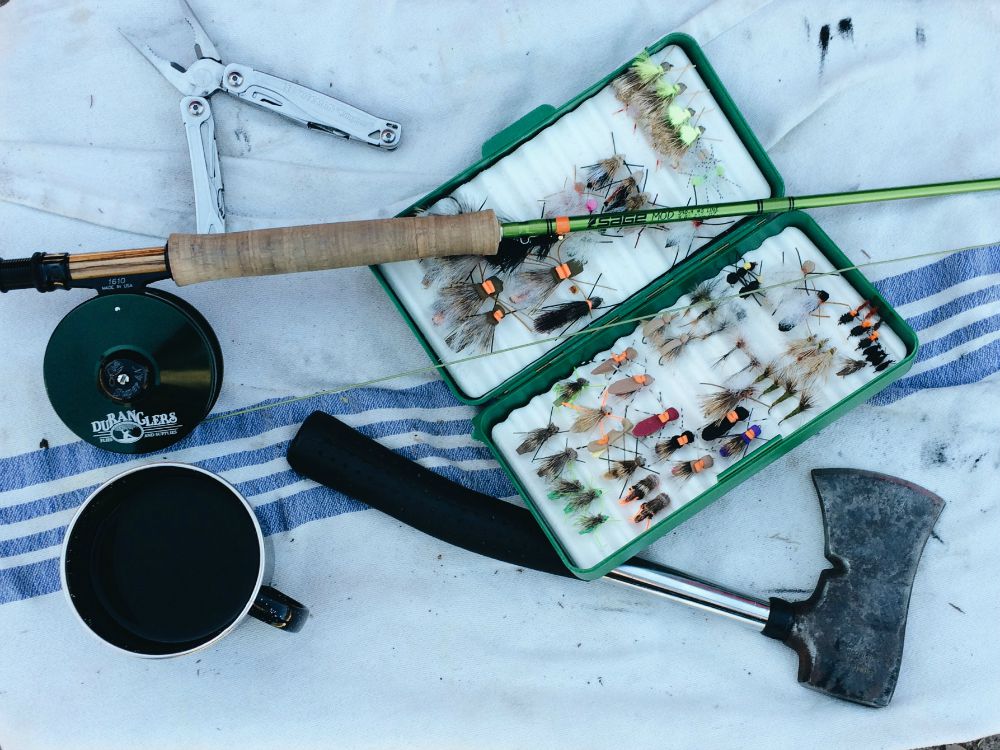 Then, we had the chance to give a few of these rods a wiggle and sling some line.  (Read our impressions here)

And then, our Sage rep (out of the kindness of his heart) sent us a Sage MOD 590-4 to play around with and take fishing for a few weeks.

After getting out on the water with this rod, we wanted to put out a Sage MOD fly rod review for those who are interested in this new offering from Sage.

Why a New Rod? 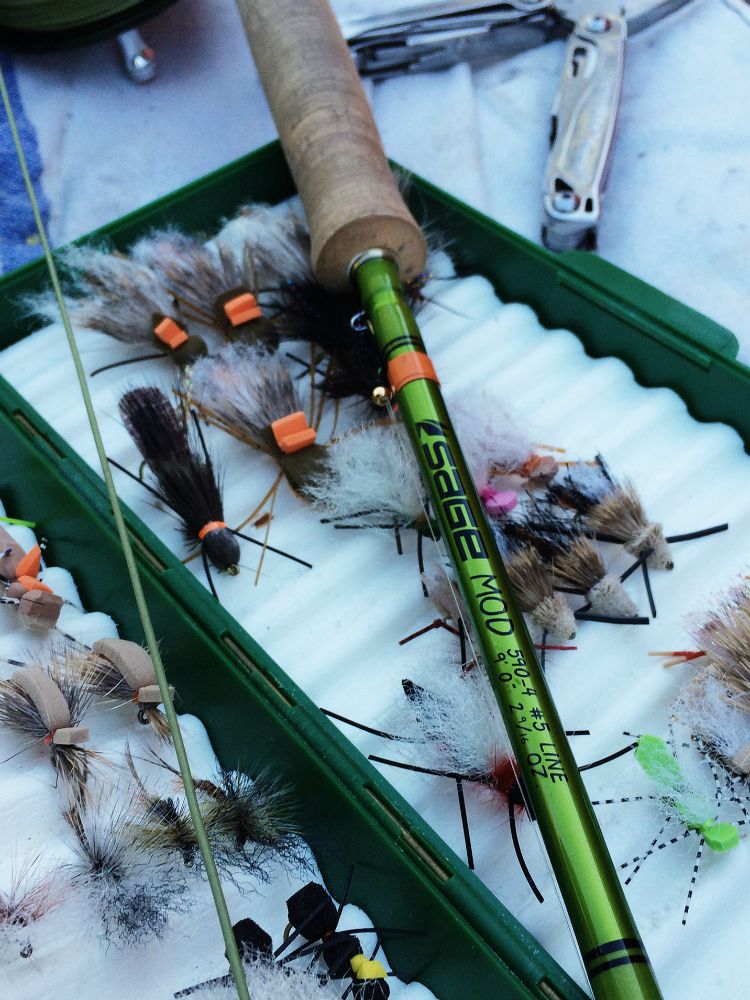 So when a fly rod manufacturer releases a new rod model, it usually signifies the end of life for a previous model.  Old rods go on sale to make room for the newer versions.  Not so with the Sage MOD.  The MOD is a brand spanking new rod that did not replace any older models.  It snuggled right into the Sage line and filled a gap that was needing filled.

What gap was that?  The gap created within Sage’s premium fly rods using Konnetic Technology.  Specifically, trout rods.  Here is my theory…

First there was the ONE, a fast action sniper rifle of a fly rod that was released to great enthusiasm.  The ONE is still Sage’s flagship rod, the measuring stick from which all other Sage rods are measured.  This is because it is the first Sage rod to utilize Konnetic Technology…and because it is one of the best fly rods out there.

Next came the METHOD, an even faster fly rod using Konnetic Tech.  Some love the METHOD in the 4, 5, and 6 weights for trout.  Most of us would rather have a Method 9 weight for bonefish.  It seems that going from fast with the ONE to ultra fast on the METHOD, the pendulum was cocked very far to one side and could only swing one way.

With that massive pendulum swing, the next rod out of the gate was the Sage CIRCA.  The CIRCA, being given the descriptor “Advanced Slow Action” was a throwback to yesteryear’s cane and fiberglass rods, but using Konnetic Technology.  Of course that pendulum swing was thrown deep into the “slow” end of the spectrum.  Unlike the ONE and METHOD, the CIRCA was refined a bit more into the trout specific realm  of 2-5 weights.  (Read our review of the CIRCA…is it just a dry fly rod?)

From fast to slow, that pendulum eventually had to settle somewhere in the middle.  Following the release of the moderate action, mid-priced ACCEL; the Sage MOD is that middle ground for Sage’s high end linup.  Not only that, but the MOD was not built to be an all-water, 0-18 weight, crappie to sailfish fly rod.  The MOD was built to do one thing, and do it well: fish for trout in rivers.  It is a trout specific fly rod.  Trout-centric.  Trout-tastic.

And let us not forget that the MOD won the “Best Freshwater Rod at this year’s IFTD show in Orlando!

What is the MOD’s MO

Sage has put a lot more ‘feel’ into the MOD (named for moderate action).  Not too fast, not to slow; but right in the middle.  As we stated, the MOD was built first and foremost for trout.  The MOD family of single hand rods covers 2-6 weights in 9 foot configurations only.  I assume that the decision to make the MOD in only 9 foot configurations was to keep it simple for now.  Sage may add different models down the road, but I have to imagine the 2 and 3 weights in 9 foot make for some pretty interesting nymph sticks…but I digress…  2 through 6 weights cover pretty much every trout scenario one could think of in the lower 48.

So what did I think?

So I was able to get the Sage MOD out on the Animas and Piedra river for a few days.  It was lined up with Rio Perception WF5F fly line that suited the rod very well.  I would have liked to try the MOD out with Rio Gold…maybe next time.  For starters, the MOD is the best colored Sage rod currently in production (at least in my mind).  Lime green with lime greener thread wraps (Sage calls it Jade with Yellow Green thread wraps, but whatever) kind of makes this thing look like one of those new hip fiberglass rods.  I am very ok with that.  The reel seat also looks totally awesome; but aesthetics catch fisherman not fish so we will leave it at that.

Oh and I do dig the “Snub Nose, Half-Wells” cork handle. 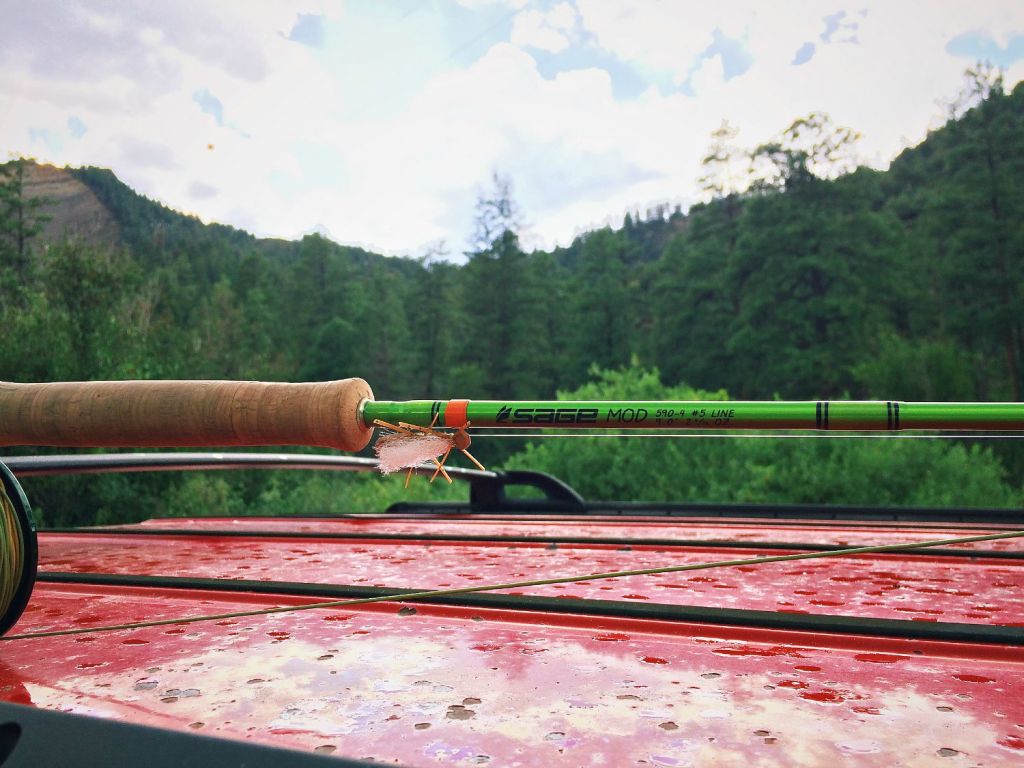 As far how this rod actually fishes…well…it is certainly a trout rod in all respects.  Without driving too much down the absurd road of hyperbole; it is very light (2 9/16 ounces), sensitive, yet with a good amount reserve power.  A soft enough tip section to throw great roll casts and single handed spey tricks, yet powerful enough to get those roll casts out farther than you would think.  With trout fishing in rivers, you are never really casting more than 30 feet, but I was able to get casts out to 70 or so just to try it out.  It casts very well.

First up was throwing dries, which the Sage MOD did with ease and delicacy.  Dry dropper rigs were no problem either.  The true test was heavy nymph rigs and streamers.  Honestly, a trout rod at this price point, I expected it to do all trout tasks well.  It did of course.  Casting nymphs and streamers went just swell with the MOD.  I did notice that since this is a softer rod, the ‘jolt’ on the back cast with heavy streamers was not at all annoying.

Oh and the MOD has a great amount of power when you need to put the wood to the fish.  When hooked up, the butt section has a lot of strength to turn a running fish.

So is the MOD actually fun to fish?

Yes, it was very fun to fish.  I was unsure at first with another new rod in a market full of great rods.  I do wish I could get the 490 out on the water though.  In our initial demo-ing of the Sage MOD, I found that right off the bat I did like the 590, but I really really liked the 490.  Hopefully soon.

Sage did a fantastic job with the MOD when they focused on releasing a high end rod that does one thing very well: catch trout.  I appreciate their commitment to making trout specific tapers over an “all-water” type of rod.  I do wish they would have built the MOD in a few shorter lengths in the smaller line weights, but maybe they will down the road.

With all the technology and thought put into the Sage MOD, it is certainly a high end rod with a $850 price tag.  For those that put 100+ days on the water fishing for trout, the Sage MOD fly rod may become their new favorite.

To put in into perspective, I really wish I didn’t have to send this demo 590 back to our rep.

In keeping this family of rods fairly simple, Sage did also build the MOD in 2, two handed models.  They put out a 13′ 6 weight and a 13′ 7 weight this year along with the single handed family.  While we did not get our grubby little mitts on either of these two handed versions (we would love to), they do follow the trend of a moderate action spey rod (no switch rods in this family).  I actually like moderate action over a fast action for spey rods, so I am looking forward to trying these out.

Even this Piedra stone gave the MOD a hug.

You will probably need a little fly fishing in 202

The classic Whitlock’s Fox Squirrel Nymph is one

Our shop doors are currently open and we are guiding fly fishing trips!

All local online and phone orders have the option of curbside pickup in Durango.  Free shipping on most orders over $50

We are also offering scheduled PRIVATE SHOPPING HOURS in-store from 7-9 am and 5-7 pm in half-hour increments.  Call to book a slot.