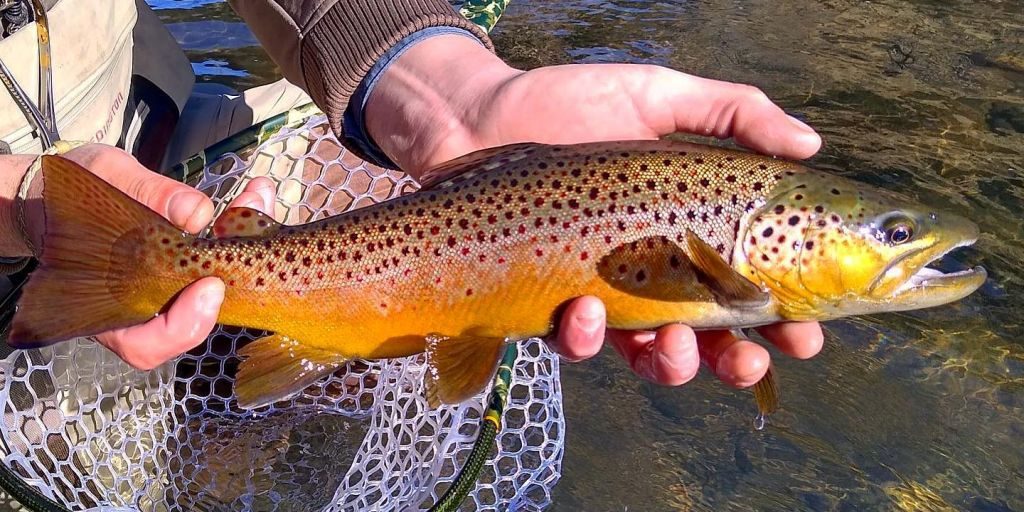 When most people think of fly fishing in the winter, their minds wander south to warmer climes and flats fishing. Destinations like the Yucatan, Belize, and Christmas Island are all great places to slip off to for a while during the cold winter months, but traveling to the tropics is not the only option to catch fish in the winter. For those anglers who want to stay closer to home, you’re in luck! The Southwest has a few rivers that continue fishing well throughout the winter.

Most trout anglers who fish throughout the year know that tailwaters are the name of the game in winter. The San Juan River below Navajo Dam is an excellent fishery throughout the winter months. Normally the flows are decreased out of the dam to about 250-300 CFS. This is still enough water to float and opens up access to even more areas from a wading perspective. One thing to note about the San Juan in early winter is that lower flows and clear water often mean pickier fish. Your favorite midge and baetis patterns will work, but you may want to size them down a size or two. Think #24 – #26 instead on #20-#22. In late winter Navajo lake experiences an effect known as lake turnover, which tends to turn the water released from the dam into a pea-green soup color. When this happens, dead drifting leech patterns can be highly effective. One of the best parts about fishing the Juan in winter is that the summer crowd has gone, and while you’ll never be the only person on the river, the days of 100 boats and 300 wade fisherman are gone and you can usually find one of your favorite spots open and fishing.

For those that prefer to fish freestone rivers over tailwaters, the Animas is also an excellent winter fishery. The Animas is the longest freestone river in the state of Colorado and the lower stretches from Durango down to the state line remain relatively ice-free throughout the winter months. With a smaller fish population and the tendency of freestone fish to move much more than tailwater fish do, locating fish poses most of the challenges in the colder part of the year. Once you have found fish, you can usually find one that’s willing to eat. Just like the Juan, midge and baetis fishing will be the most productive. Nymphing is the way to go unless you see fish near the surface feeding. Personally, I have had some excellent dry fly days through the months of December-February right here in Durango. Streamer fishing can still be productive through the winter, though you’ll want to dead drift those streamers or strip them very slow. Trout will not expend a ton of energy to hunt down a baitfish in the colder months, so make sure you make your fly move at the pace they want. As far as nymphs go, midge and pheasant tails in an #18-#20 work great, as well as bigger attractor patterns like a Copper John or Prince Nymph in a #14-#16. My winter nymph rig usually has a #16 Copper John as my top fly and a midge larva below it. For dry flies, I like Parachute Adams and Griffith’s Gnats in a #18-#20. Sculpin patterns like the Animas River Special and Sculpinator work great for streamers, as well as a classic black or olive Woolly Bugger. I also really like Rubber Bugger, which is essentially just a wooly bugger tied with rubber hackle instead of the traditional hackle. These rubber legs give the fly great movement in the water and can be tied in a variety of colors. My personal favorite color schemes for these flies are Black, Olive, and Halloween. 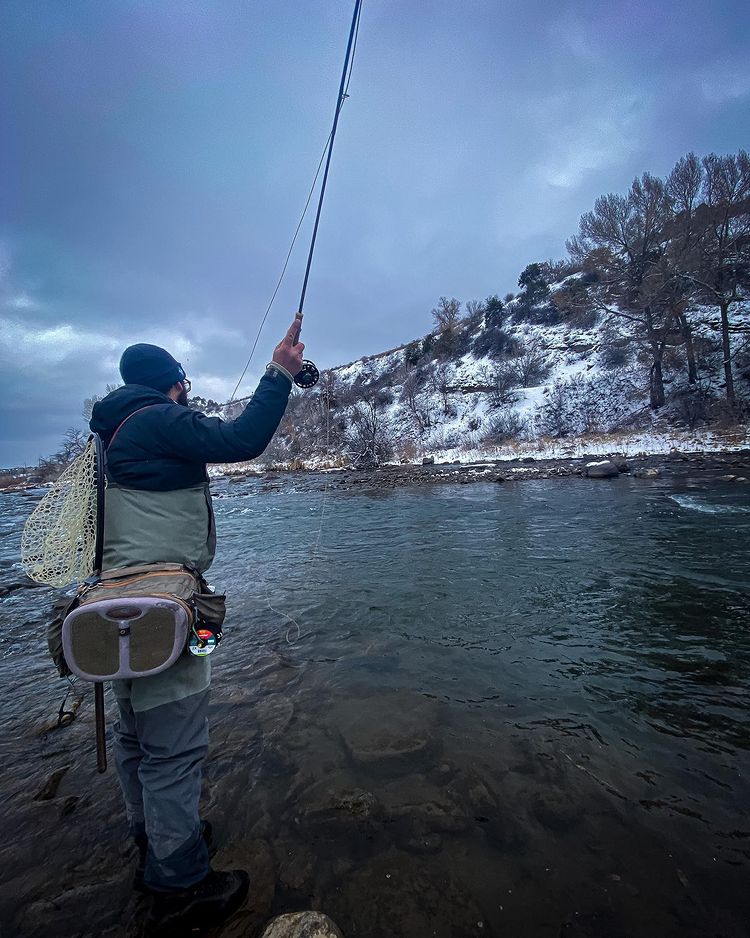 There are other local waters that have historically fished well through the winter, the one of most note is the Dolores River below McPhee reservoir. Flows have been decreased out of the dam for most of 2021, which has made the fishing sub-par when compared to years past. The lower Dolores river offers a challenge unlike what you’ll find on the Animas of San Juan. This river is not a numbers fishery but does hold some very nice brown trout. On nice days you’ll be able to get shots at these 20”+ fish with small dry flies. It’s thrilling enough in itself to see the kyped jaw of a big brown trout sipping a small midge of mayfly off the surface, and hooking into one of these fish will be something you’ll never forget. The fishing here is technical, with long leaders and small flies being the norm. A wise dry fly angler once told me “If you can catch a fish on the Lower D on a dry in the winter, you can catch a fish on a dry anywhere” and I haven’t seen anything from my time spent there that would make me think he was lying. As it currently sits, this looks like it will not be an option to fish this winter. Due to the before-mentioned decrease in flows over the summer, the beavers had a field day. This was good in the summer as it gave these fish a few more deep holes for them to escape the heat, but upon my last visit to the lower Dolores around Thanksgiving time, all these newly formed beaver ponds are frozen over. While we might not get the conditions back where I would feel comfortable fishing this river for another couple of years, it is worth knowing about if they ever decide to increase flows out of McPhee dam again in the future.

Of these three rivers, the closest to Durango is obviously the Animas which runs right through town. The San Juan tailwater can be reached with a 50-60 minute drive south and across the New Mexican border. The Dolores river tailwater section below McPhee is about an hour and a half drive from Durango. For those that don’t mind traveling over Red Mountain Pass in the winter, The Uncompahgre river tailwater below Ridgeway Reservoir as well as the Gunnison below Pleasure Park also fish very well in the winter. These rivers require a 2 to 3+ hour drive north of Durango and a crossing of the before mentioned Red Mountain Pass, which is prone to closures due to snow and avalanche risk in the height of winter.

All and all Southwestern Colorado is a great place to be if you like winter fly fishing. The colder months bring solitude not found on the river in the summer. While most people are skiing or ice climbing, the dedicated angler can often find a spot to fish on whichever beat of whichever river they’d prefer to fish. The fish will not be as active as they are in the warmer months, but they still have to eat. Fish low, fish slow, fish small. Follow these rules and you may be surprised at how many fish you can actually get to hand during the short and cold days of winter. Remember to take off your gloves before you handle fish, handling fish with gloves will remove the protective mucus layer from their bodies and cause them to literally rot while they are still alive. If you do not want to remove your gloves and get your hands wet, get a hook release like the Ketchum release of the guide’s choice fish release, both can be found here at Duranglers.

Hopefully, this article gives you some hints and tips on places to fish and gear to use to have a successful day of winter trout fishing. If you’re still struggling to catch fish in the colder months remember that the crew here at Duranglers are here to help and answer any questions you may have.  Don’t forget about our winter guide trip special that we run through the end of February as well!

Holiday Gift Ideas for People you Like and Don’t Hate
November 24, 2017

This is one we have been pretty excited about. Af

Want to learn to fly fish, or grow your fly fishin