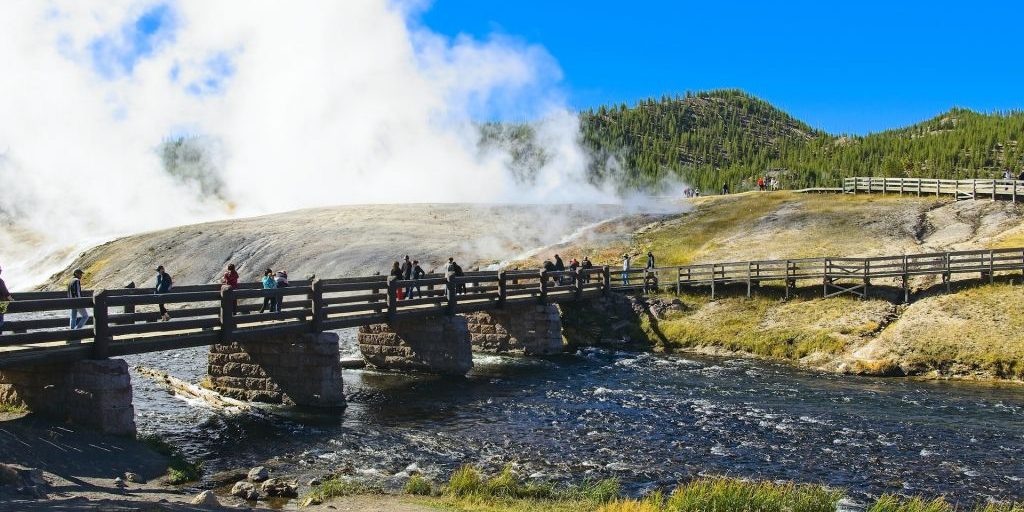 It was a cool June morning in Yellowstone National Park. Steam blanketed where geyser heated water met the snow runoff from the mountains. I wondered how trout could live there. Was my father playing a cruel prank on me? Maybe as soon as I stepped foot into the river the skin along my feet and ankles would be instantly melted leaving smooth, bleached bone. Maybe, but that was a chance I was willing to take.

As we snaked through pine forests and open meadows a sense of wonder befell me. I wondered if John Colton had felt this way when he first laid eyes on these steaming geysers and bubbling cauldrons. How much could it have changed since then? I felt as though I had been transported back into those wild days of the west that I had so often read about. How could my youthful eyes, so small in size, see such and old and vast world as this? I had been so taken back by the beauty of it all that I almost forgot why we had come so far from home. As we inched closer and closer to the river I remembered. We were here for one thing and one thing only, and that thing was a trout.

We pulled off the road and anxiously rigged up our rods. I was lost in deep thought about something I can’t remember when my father interjected. “God sure doesn’t put trout in ugly places, my boy” he said as he spit out a glob of Timber Wolf Cool Wintergreen onto the verdant meadow grass beneath us. As we sat at the confluence of Nez Perce creek and the fabled Firehole River, I didn’t have to simply believe him this time. I knew. As we watched eager trout relentlessly devour what I later found to be huge white miller caddis flies, I couldn’t help but to be overwhelmed with joy at the serene beauty of it all. There was a herd of elk that, to my early teenage memory, seemed to be two to three hundred heads strong grazing lazily on the edge of the meadow. The few bison mixed in reminded me that I was so far removed from the swamps and coastal marshes that I had called home for most of my life. My father, having enticed a number of trout to his fly, beckoned for me to take my turn. I can still remember that sloppy cast slapping the water like the river just said something particularly nasty about it’s mother. My fly had barely landed on the surface before a hungry brown trout swallowed it, and like many anglers are wont to do, I farmed him. I don’t think I realized at the time, but my life had changed forever.

Before long I had found my rhythm and found a few fish of my own in the net. The day seemed to exist outside of time itself, as if it existed in a single moment that stretched out across oblivion. That day will never truly end, but as the light slipped away like the elk back into the darkness of the forest so did I allow a piece of myself to slip into that river. It stays there, swimming aimlessly between Madison Lake and the island where the Gibbon and Firehole meet and back again. My feet, lacking any burns in their entirety, can still feel the somehow cool water rushing around them. If I look close enough I can still see the elk antlers in velvet jutting out above the blanket of steam. This was church, and every cast another prayer longing to be answered.

Ever since that day, much like Norman Mclean, I too have been haunted by waters. These specters do not call me to death but to life, the phantoms of the wild and natural wonders of this world howling for resurrection. I have long tried to bear witness to these oft-forgotten spirits and to partake in their sacrament, washing away the sins of the mechanical world. Deep within the vales they have carved through the earth over endless numbered years I have learned their secret names that only I know. In every bend and cut bank I have heard their stories, and I have come to know them in my heart. The verses of their epistles have become etched into my bones, and the first chapter starts where the geyser’s roar upwards towards heaven along that sacred Wyoming riverbank.

There were other rivers in Yellowstone, those I have fished and those I have not, but even among the latter group there will be no river in the park that will ever effect my life as much as the Firehole. My father had always taught me the sanctity of the water and the sacredness of the denizens thereof. Somewhere in my life the siren song of the sea became less attractive than the ballad of a meandering mountain stream. I have often pondered as to when exactly where this change took place, and the closest I can come is right there along the banks of the Firehole where every fish in the run was rising. In those crystal clear waters that were positively alive with trout, I found a new love, a love my early teenage heart could fathom, and one that has carried me halfway across the country in the pursuit of the most beautiful creatures I have ever laid eyes on.

After long last, the updated @simmsfishing Guide B

Due to a last-minute cancellation, Duranglers now