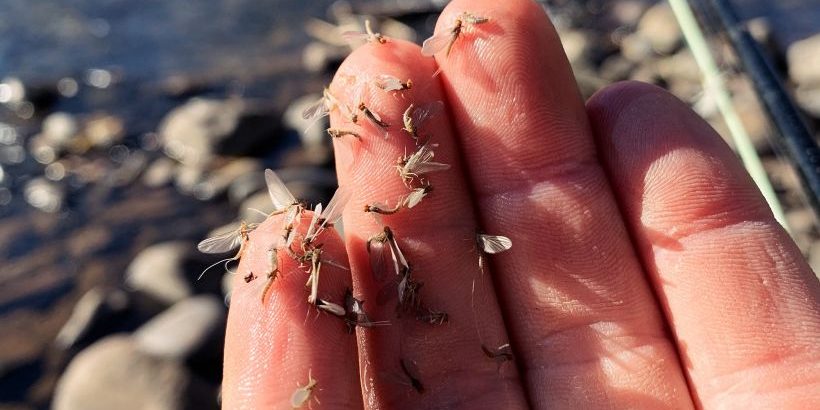 Colorado is known the world over for it’s breathtaking mountains, gorgeous landscapes of aspen and pine, and it’s numerous cold and clear rivers that are often positively alive with trout. In October, when the wind blows crisp through the cottonwoods, it is easy to get lost in the natural beauty that we so often take for granted in our part of the world. For those who fish flies, we know that the changing leaves and dropping temperatures mean one thing, the Baetis are here.

Baetis are small mayflies in the family Baetidae, and with at least 150 described species it can be hard to know exactly which bugs are hatching at a general time. As anglers we refer to almost all of these bugs as Blue Wing Olives, or BWOs for short, regardless of their actual body or wing colors. Baetis can be olive, but they can also be dark or rusty brown, or even black. All of these bugs share one important aspect in common though, and that is the fact they are small. Think almost midge sizes, #18-#22 with some ranging down to the #24 range.

If you aren’t afraid to fish small bugs, October can offer some of the finest dry fly fishing of the year. Fish generally key in strong on baetis hatches, eating the emerging insects and the adult flies. A small Parachute Adams can provide aggressive strikes on the surface, and if you see the backs and tails of fish breaking the surface as opposed to their heads, dropping a small RS2 a few inches off the bend of the hook shank will exponentially increase your hook up rate.

If fish are not eating emergers or dry flies, odds are they are eating baetis nymphs. Some of my personal favorite baetis nymphs are the Olive Killer Mayfly, Brown Bead Headed Micro Mayfly, Split Case Baetis, and Fluff Baetis. A small Flashback Pheasant Tail or Hare’s Ear will work great as well. When I am fishing baetis nymphs I like to use a sensitive indicator like New Zealand wool or poly yarn and a drop shot rig to allow those small bugs to have a little more movement in the water.

With the colder temperatures, changing leaves, and hunting season in full swing the rivers are less crowded than they are in the warmer months. A patient and steady handed angler can have one of his best days on any given river in the state in the month of October. Keep the small bugs handy, layer up, enjoy the scenery, and most importantly catch some fish!

Join us tomorrow, December 2nd for Noel Night, our