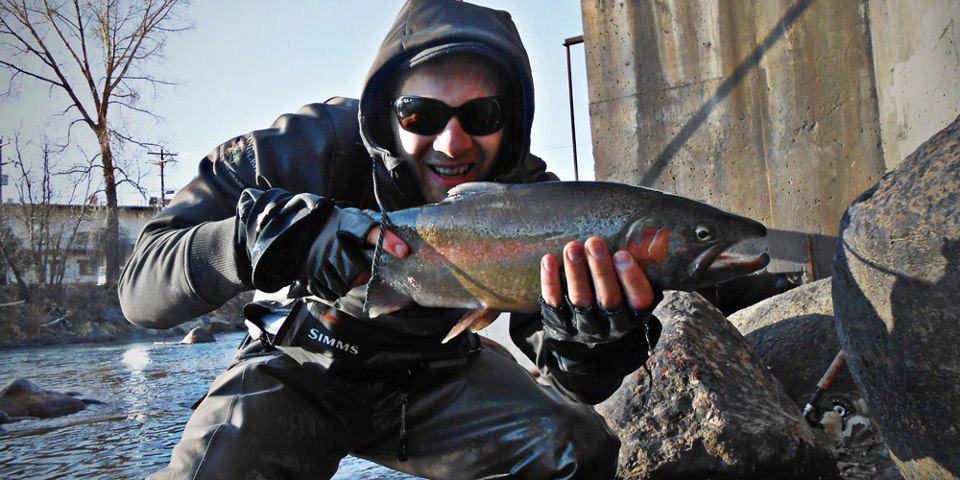 The beginning of March marks the beginning of spring.  Now of course it is not OFFICIALLY spring, but to Trout; it might as well be.  With spring temps, the fishing on the Animas will start to pick up greatly.  Fish will begin to move off of the bottom of the deepest pools into the more swift riffles and runs.  Consistent hatches of baetis will also bring fish to the surface.  Rainbows also begin their yearly spawn and many eggs will be in the system to be chomped.

Of course, the San Juan continues to produce great amounts of fish.  Look for warmer days to bring out great baetis and midge hatches.  Navajo Reservoir will turn over soon as well.  With the lake turn over, a lot of food will be kicked into the river system.  A leech pattern

A few other rivers here in the southwest part of the state also begin to thaw out and begin to fish well. Fish in the Los Pinos, Piedra, Williams Creek, Dolores, Rio Grande, and the San Juan in Pagosa Springs will be more active with the warmer weather and the ice should have cleared off in areas with ample sun.

March also usually marks the beginning of our pike fishing season on Navajo Reservoir and a variety of other local lakes and reservoirs.  Captain Mark Engler is ready to take out any seasoned angler ready for a new and more vicious challenge.

Drainages in Southwest CO will be slowly showing their signs of life.  Look for a string of warmer days to bring out hatches of baetis in droves.  Baetis hatches in spring can account for the best dry fly fishing on the Animas for the entire year.  Stonefly nymphs have begun moving slowly towards shore and can be swept up in the current to become a reliable and good food source for trout.  Even though it is warming up, don’t count out midges either.  It is possible to see a great midge hatch or two in March.  Finally, streamers with a little more action and speed will bring out the angry trout.

As with SW Colorado rivers, baetis will begin to show themselves with the warmer weather on the San Juan.  Dry fly action will pick up in the afternoons.  If they are not eating your baetis dry; tie on a smaller midge dry.  As the San Juan is a tailwater: midge larva, midge pupa, midge, emergers, and midge dries will always be on the menu.  Other food sources to be aware of are: eggs, annelids, aquatic worms, leeches, and in the lower stretches of the river towards town streamers.  Big, rainbow trout fingerling streamers.

If you have the urge to catch a Pike on the fly, now is the time to do it.  The reservoirs in Colorado have mostly iced off at this point due to our mild winter.  Navajo Reservoir in New Mexico is open and ready for business.  Pike eat big things: minnows, sculpins, crayfish, trout, bass, and other pike.

Pike:  Massive pike streamers in brown, olive, or black.  Engler’s Pike Fly, Barry’s Pike Fly, Meat Whistle, Hairgrub, and Hairjig are all great choices.  However…another great option is to stop in your local fly shop, find the salt water section, and proceed to pick up a selection of the biggest, flashiest, craziest patterns you can find.

Check out our guide Christian Fryer here with his

Snow on the forecast for the high country next wee

It’s a hopeful day today because our shop doors are open and we are guiding fly fishing trips!  We are following our local ordnances and maintaining a high level of cleanliness in the shop.  We are asking that everyone who comes in to wear a face covering, observe social distancing, wash your hands, and avoid coming in if you have any symptoms of illness.

We are following all COVID-19 proticols for guided trips which can be found here.  Book a trip now by calling 970-385-4081.  Our calendar is filling up!

We are still offering online and phone orders with curbside pickup.  Free shipping on most orders over $50

We are not offering in store license sales at this time to limit the number of person to person interactions. Colorado licenses can be purchased online at the CPW Website.  Online New Mexico fishing license sales are here.

The Southern Ute tribal waters are NOT open to non-tribal members.

We can help answer any questions you may have through e-mail to [email protected], phone calls from at 970-385-4081, or website live chat.