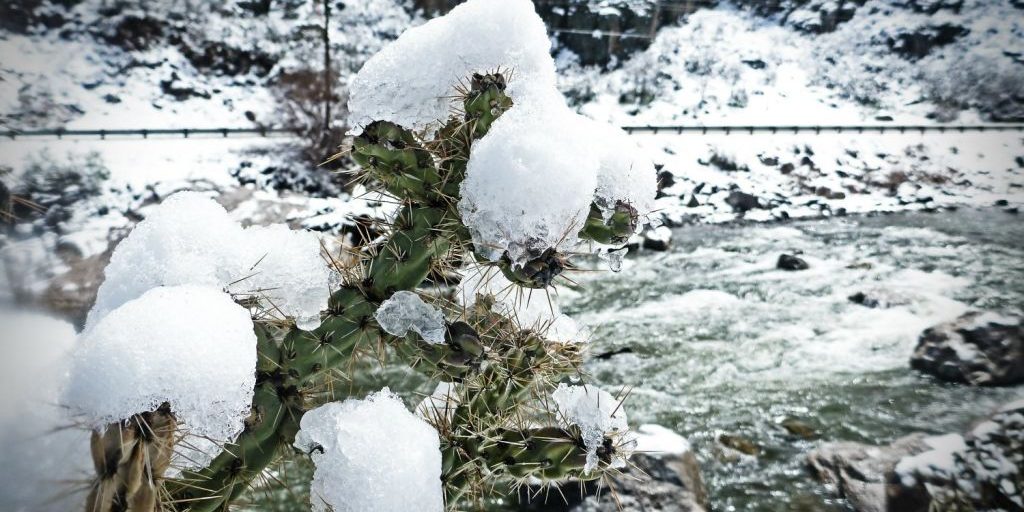 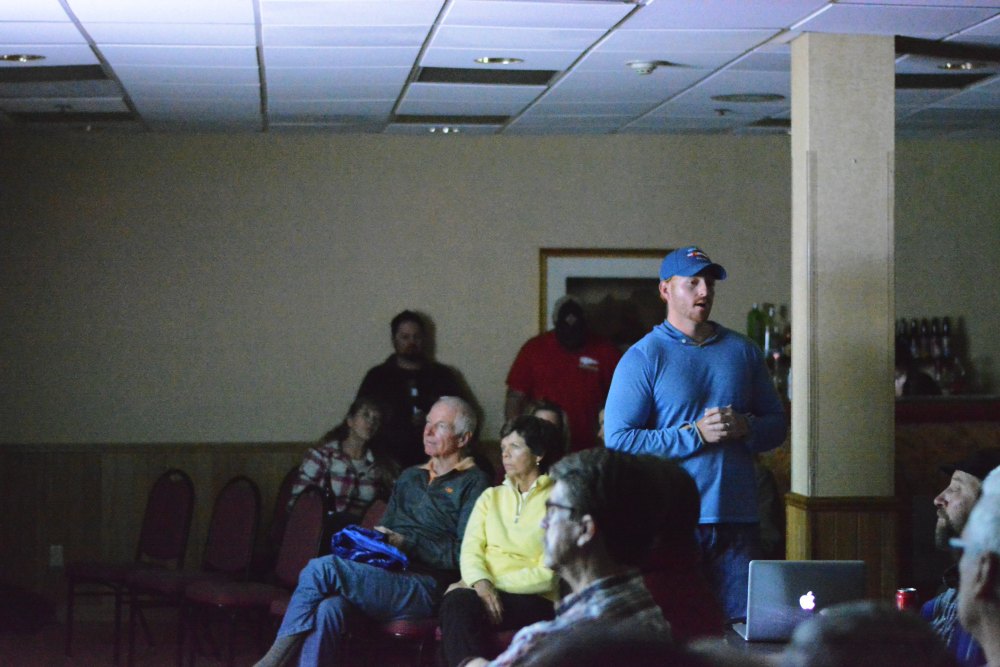 Taylor Edrington, owner and guide with Royal Gorge Anglers, did a presentation on the Arkansas River on night one of our 2016 Fly Fishing Festival.  His presentation, titled “The Arkansas: North America’s Longest Gold Medal River”, was a huge success with our customers and staff alike.  We learned a ton about this amazing fishery.  I took some notes in hopes of conveying just how informative Taylor’s presentation was and how incredible the Arkansas River is.

As the title of this presentation indicates, the Arkansas River is America’s longest “Gold Medal” river.  That is 102 river miles of gold medal water.  “What is gold medal water?” you may ask: the “Gold Medal” standing is defined as being waters that are able to produce 60 pounds of trout per acre, and at least twelve 14″ or larger trout per acre. Only 322 miles of Colorado’s 9000 miles of trout streams, and three lakes, carry this “Gold Medal” designation.  That means that almost a third of Colorado’s “Gold Metal” designation lies upon the Arkansas River. 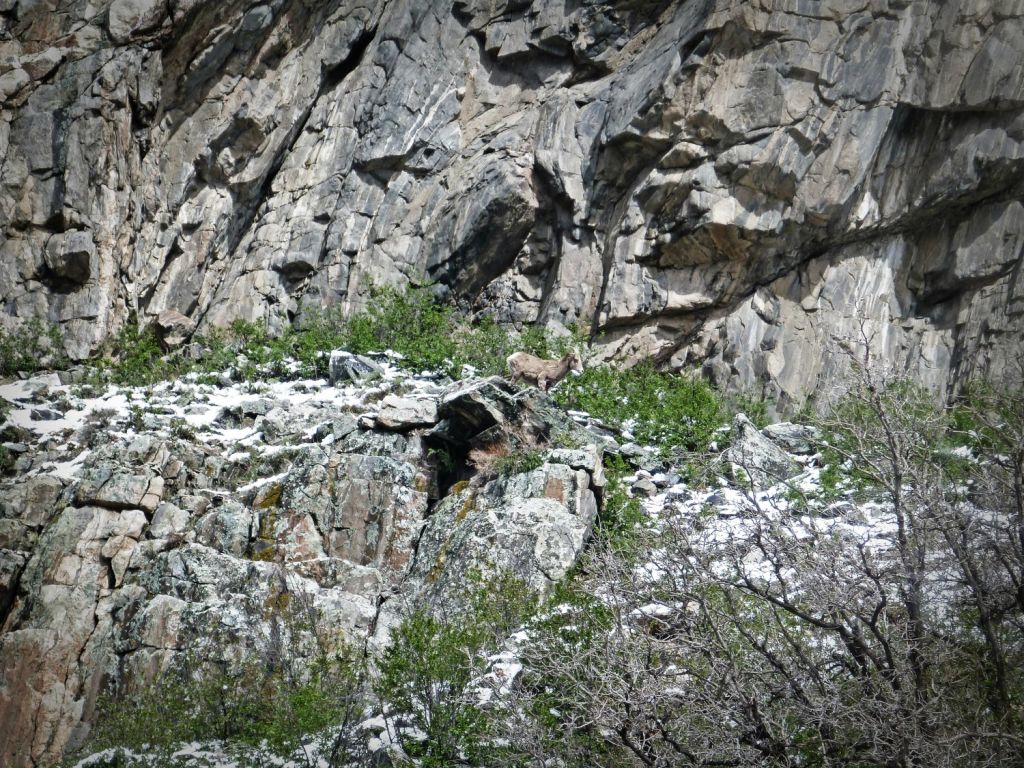 Lots of wildlife on the Ark.

Also included within these 102 miles of Gold Medal water is Browns Canyon, Colorado’s newest National Monument.  This national monument provides protection for the the peregrine falcons, elk, and bighorn sheep that call the canyon home (Thanks Wikipedia).  It is also the most popular destination for whitewater rafting in the country.  You may have even heard folks talk about “getting a few drifts with their fly in between boats during the height of the rubber hatch” when they discuss the Ark.  There is a lot of rafts here in the summer…but a serious ton of fish too. 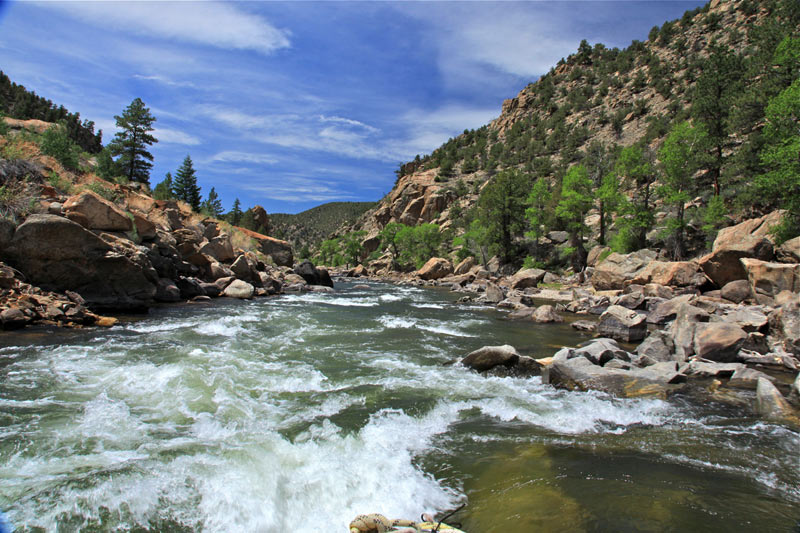 So here are a few things to note that will help you understand how great the Arkansas River really is: 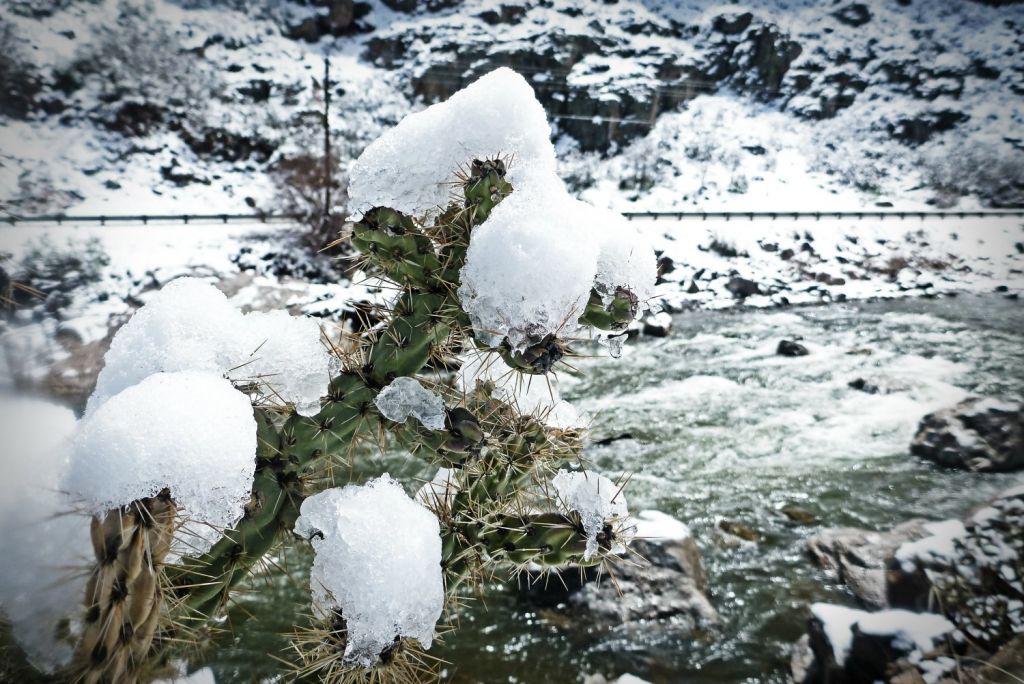 Unlike many western freestone rivers, the Arkansas flows through the “banana belt” of Colorado.  This keeps the waters warm enough so that they don’t freeze over and ensures plenty of midge activity throughout winter.  The winter season runs from roughly November through mid February.  After that, comes what Taylor calls “The Sleeper Hatch” season.  Blue Winged Olives hatches are what make up this “Sleeper” hatch, and it is named such because not to many people target it in late winter/early spring.  Most often, this hatch can be marked on a calendar as it coincides with St. Patrick’s day.  This time also marks when the stoneflies begin to molt and fish can be very active feeding on stonefly nymphs.

As the Sleeper Hatch runs it’s course, another season begins.  Kicking off right around April 15th in Canon City (give or take a few days depending on weather), the “Tax Day Hatch” begins.  This “Tax Day Hatch” is THE caddis hatch to fish on the Arkansas.  While many people know of the “Mothers Day Caddis Hatch”; if you are to target the river around the beginning of May instead of the middle of April, you are too late.  This is also the time of year to swing wet flies on single and double handed switch rods.  Caddis dart to the surface with maximum survival ferocity, and the trout follow to attack these bugs in their most vulnerable state. 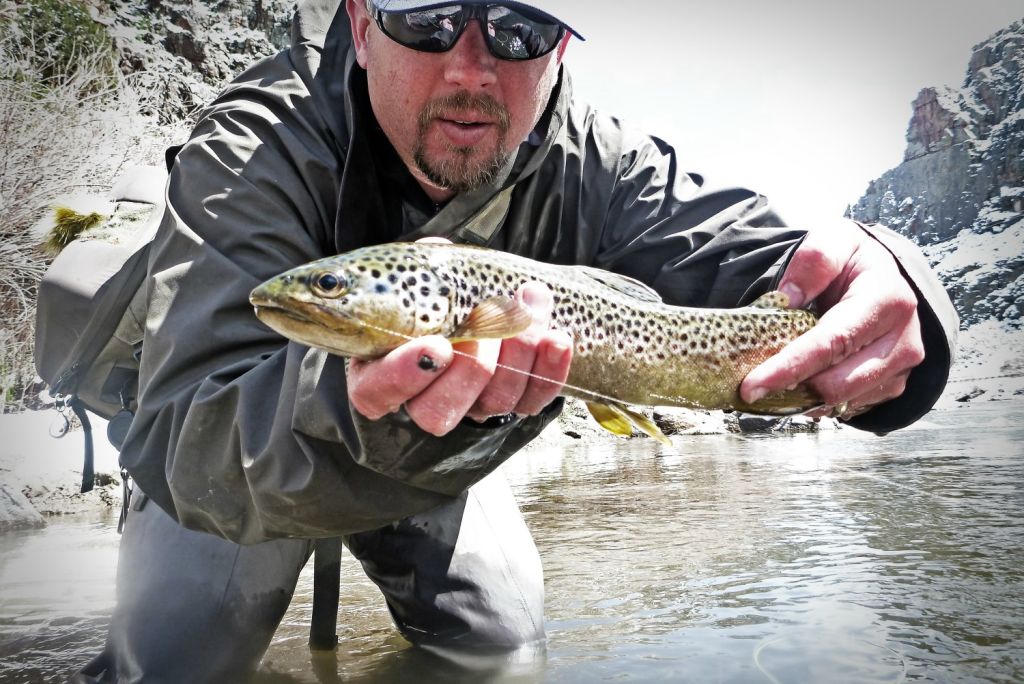 This season of incredible caddis hatches comes to an end with “Blowout time”.  Blowout is just another word for “runoff”.  Rising, muddy waters from spring snowmelt make for tough fishing…but once that peak flow hits and the waters begin to drop it is time for “Clearing Edges”.  What this means is that while the water is still high and off color, most fish have moved to the edge of the river to seek shelter from the main current.  This time of year also produces fantastic stonefly hatches.  A stonefly dry dropper combo fished from a raft along the bank is an incredible way to catch fish at this time.

And then, of course, it is summer prime time through July and August.  The Arkansas is clear and float-able and it is prime time for summer dry fly fishing.  Hatches of yellow sallies, caddis, and PMDS are popping throughout this time and fish are looking up.  Early August also marks the season of mega mayflies.  Drakes, Red Quills, and BWO’s pop off in abundance.  This is seriously the time to be on the Arkansas if you are a dry fly fanatic.  Just make sure you have some red dries.

And then comes the monsoons of August.  This can be a technical time to fish the Arkansas as the water temps are high and the flows are down.  Fish tend to hang low through the heat of the day, so it is best to fish mornings and evenings.  The good news is that August through September also mark hopper-dropper season.  Tie on your favorite big bodied hopper and a bead head dropper in the evenings and head out to hunt hungry trout.  Later summer and early fall hopper fishing in Colorado is an incredible experience, and the Arkansas is the poster child for hopper dropper Colorado pocket water. 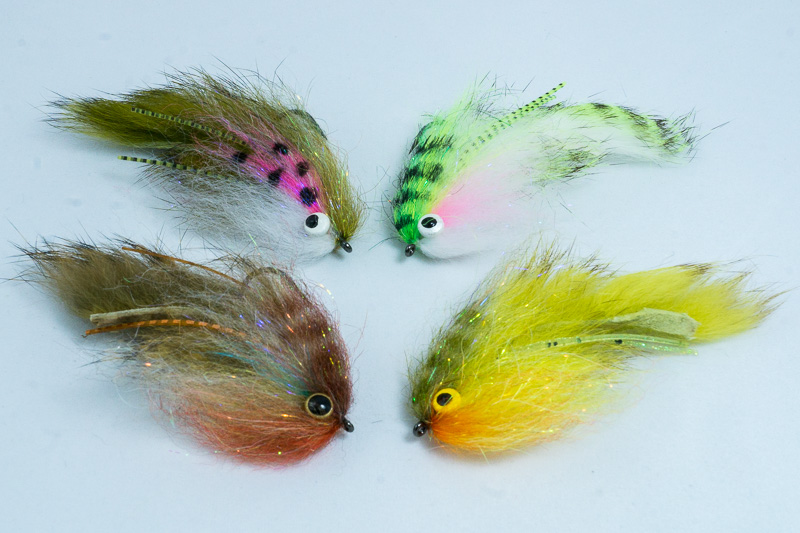 After the heat subsides and the crisp fall air brings changing leaves and bugling elk to the high country, it is streamer time on the Ark.  September until November marks this magical time where big fish junkies can get their streamer fix on the Arkansas.  It is best to fish tandem streamer rigs with a big fly in front, smaller in back.  Yellow, rust, olive, and white are good colors to have in your meat locker.  Flies in the vein of the Morrish Sculpin, Circus Peanut, and Bennet’s Lunch Money are in order.

Then the snow flies in November, and with the cold: the winter season starts anew.  It’s midge and nymph season once again in the Banana Belt of Colorado.  With such diversity of fishing opportunities throughout the year, an abundance of bugs, and a plethora of trout; the Arkansas is a river that should be on everyone’s hit list.  Plan a weekend trip and get in touch with the folks over at Royal Gorge Anglers, they will get you set up with the bugs you need and point you in the direction of the fish.

You an also check out this very thorough map put out by Colorado Parks and Wildlife that will help you in planning your Arkansas adventure. 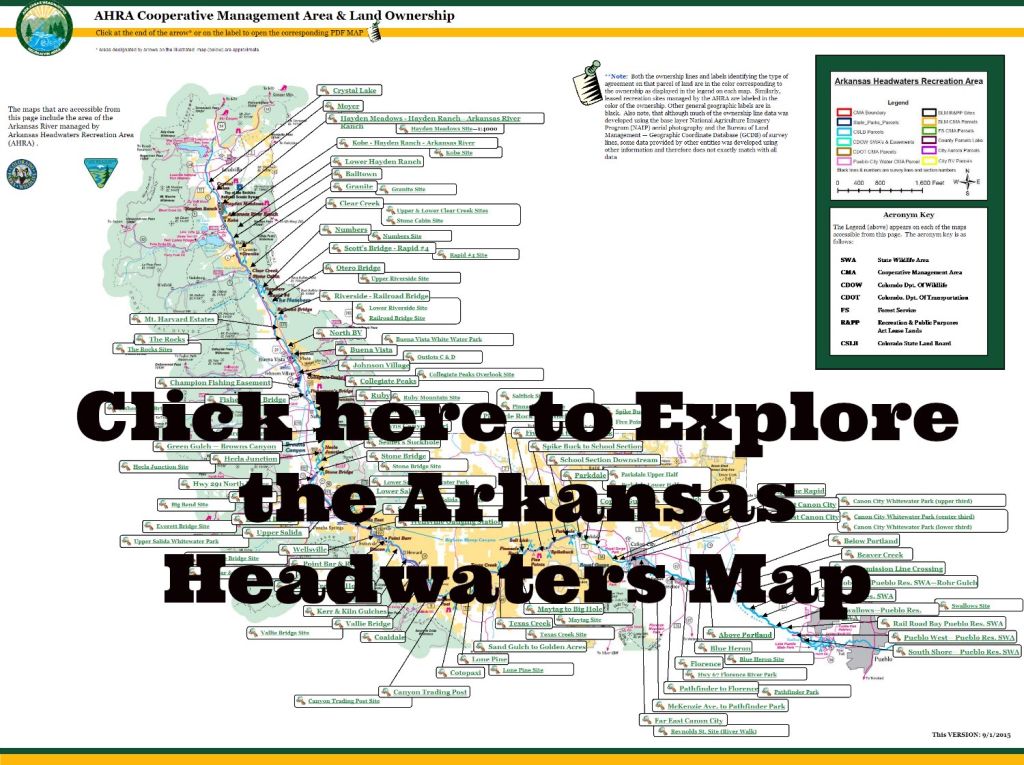 So it begins…Spring Pike Fly Fishing is on the Rise
February 21, 2020

Book a Spring Break fishing trip and break up the ski days
February 10, 2020