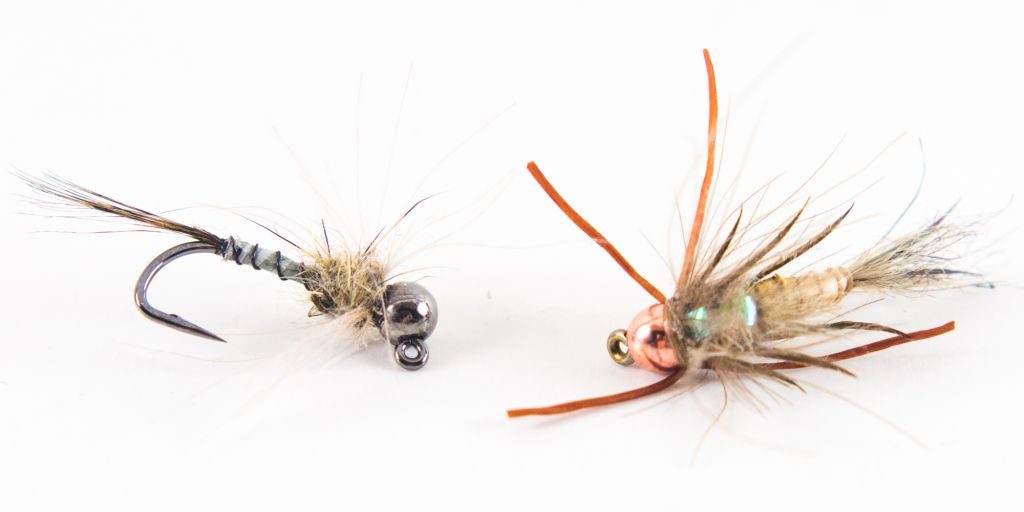 I had a few goals this year.  One of my goals was to update our somewhat antiquated web design for duranglers.com.  With that goal completely smashed (it has been a 2-year project), there are still lots of projects that have come up.  With the onset of social media hysteria over the past few years, our blog has actually taken a bit of a back burner recently with other projects.  Of course, I am going to fight the good fight of the blogosphere until the bitter end.  I still think there is a lot to be gained and shared with the written word via blog.

Anyway, I kicked off a new series on our Instagram or Facebook story that you can follow every Thursday titled “2 Flies”.  This series will be showcasing 2 flies that we are using RIGHT NOW to catch fish on our local waters.

However, for those that have not adopted the social media hype, I am going to also publish a short blurb on our blog to show you what flies we are using.  So without further ado…

The Tungsten Assassin Jig is a new fly for us this year.  In fact, the new style of jigged nymphs is pretty new for us here at Duranglers.  However, we have become believers in their ability to find fish when nothing else will.  These flies were designed to be used with a tight line Euro set up with the heavy jig ticking the bottom, but I have also been fishing a jig nymph under an indicator with a lighter fly up the leader tied on with a tag.  It has worked rather splendid.

The Assassin Jig has become one that I have been using in our recent dirty water.  We have been preaching the gospel of dirty water for a long time, but it is still hard for some to believe in.  The short of it is that fish move from the main current which becomes very swift, into the slower softer water along the banks.  You don’t even have to wade.  Just walk any local river bank, and pick apart the slow water with this jig and a favorite flashy nymph.

The TGJ Golden Hare’s Ear is one of those flies.  Much like a familiar song on the radio that you remember the lyrics, but don’t know where it’s from, this is one of those bugs.  More “Golden Stone” nymph than actual “Hare’s Ear”, this bug is great in the Spring when our local stonefly population is starting to move due to higher water and the imminent onset of summer.  This is a worthy bug to have in your box throughout the dirty water season.

So don’t be afraid of the dirty water.  Get out there and fish it!  Stop in the shop to check out these and other flies we are using.  Spring is picking up around here and fishing really is getting good!

Creeks are still running a bit high, but that shou

Meal prep. Tom K. cooking up a few things for the

Along with a good week of chasing permit and the l